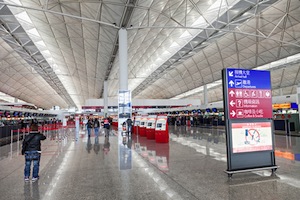 More Chinese flocked to Hong Kong during the first six months of 2013 than in the same period in 2012.

The Hong Kong Tourism Board announced that mainland Chinese visitor arrivals were up 16.2% in the first two quarters of 2013, over the same period from the previous year. Hong Kong also registered 12 million total overnight visitor arrivals between January and June 2013, representing an 8.7% year-on-year increase.

According to an HKTB survey, the number of overnight mainland visitors who came to Hong Kong for vacation grew 19.4%, with growth from both Guangdong Province at a 20.7% increase and non-Guangdong areas at a +18.5% increase.

In the same period, short-haul arrivals to Hong Kong dropped 4.2% year-on-year, since Japan drew away many regional travelers with its weak Yen. By market, overnight arrivals from Japan fell 29.1%. Taiwan, however, registered a 4.1% increase in overnight arrivals, which could be attributed to the free, online, pre-arrival, visa-registration service offered to Taiwan residents by the Hong Kong SAR Government.

Be the first to comment on "Mainland Chinese Travelers To Hong Kong Up 16.2%"