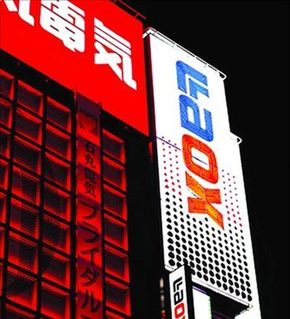 Suning's controlling subsidiary Laox is accelerating the realization of its international strategy and the company opened eight new stores in September 2015, reaching a total of 30 stores in Japan.

In October 2015, Laox plans to open two additional stores. Prior to this, the company also launched an online overseas flagship store on Tmall's international site in August 2015.

Zhang Jindong, chairman of Suning, confirmed during his inspection tour in Tokyo that they will invest JPY40 billion in Laox and open 50 stores in Japan in the next three years. Suning said that Laox is in line with Zhang's cross-border e-commerce deployment and basing on Laox, the company will explore the overseas O2O shopping model in the future.

Compared with six years ago, when Laox only had six stores, the company gained rapid development after being acquired by Suning. With the opening of eight new stores in September 2015, it now has 30 outlets.