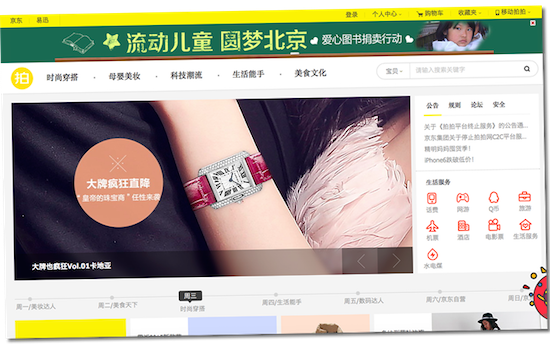 Chinese B2C e-commerce operator JD.com announced that they will stop services at Paipai.com on December 31, 2015, and after a three-month transition period the website will be completely shut down by April 1, 2016.

Paipai.com already stopped accepting new vendors, and JD.com said that according to the platform service agreement between Paipai.com and current vendors, the store services provided by the website will end on December 31, 2015, and will not be renewed. The team at Paipai.com will merge into other units of the e-commerce group to focus on innovative businesses such as mobile social e-commerce.

The major reason for closing Paipai.com is the unsolvable problem of fake goods. The company said the C2C model does not require industrial and commercial registration of individual sellers, which leads to ineffective supervision and illegal sales of counterfeit goods.

Paipai.com, originally owned by Tencent, was integrated into JD.com in 2014 when JD and Tencent reached an e-commerce strategic cooperation.

Be the first to comment on "JD.com To Close Paipai.com By End Of December"