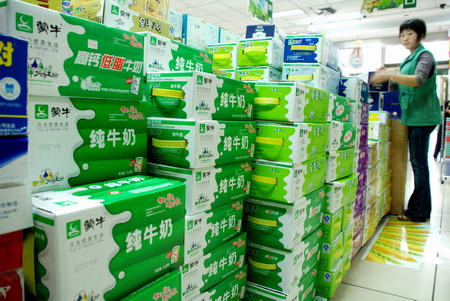 Sun Yiping, who has commanded Mengniu for over four years, suddenly announced plans to resign and Lu Minfang from Danone, the second largest shareholder of Mengniu, will replace Sun to become the head of Mengniu.

According to the report published by Mengniu, Sun has resigned her positions as Mengniu's executive director, president, and member of the strategy and development committee. Meanwhile, Yashili's president Lu Minfang has been appointed new president of Mengniu.

At the same time, Yashili also published a report, stating that Sun has resigned her positions as Yashili's non-executive director and chairman of the board of directors and Lu will no longer be Yashili's president. With the changes, Yashili's president position is now vacant and the company said that they will appoint a new candidate at the right time. During the interim period, Lu will continue to act in the president functions.

In April 2012, Sun was appointed as the third president of Mengniu. Unlike her two predecessors Niu Gensheng and Yang Wenjun, who are the founding presidents, Sun is a professional manager for Mengniu.

Be the first to comment on "China's Mengniu Announces President Change"