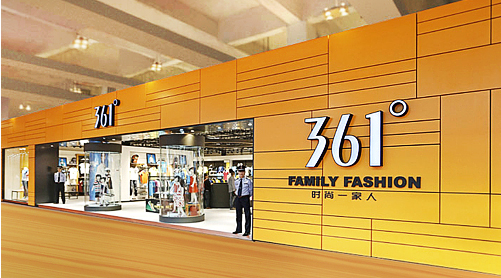 In the fourth quarter of 2016, 361 Degrees continued to cooperate with 31 exclusive distributors under a franchising business mode. During the reporting quarter, the group opened 184 new stores and closed 464 stores, and the total number of its stores reached 6,357. 361 Degrees said that it is an ideal scale to maintain its store number at about 6,500; meanwhile, they will continue to improve store efficiency.

Based on statistics from 3,543 sample stores, which kept uninterrupted operation for over 24 months, the company's individual store sales of its main brand saw an increase of 7.5%; its average retail discount was 25%; and its channel inventory turnover ratio was 4.1 times.

In addition, during the fourth quarter of 2016, the company's independently operated children's clothing business added 103 new stores and closed 334 stores, reaching total sales sites of 2,000. The individual store sales of children's clothing saw an increase of 7.7% and the channel inventory turnover ratio was 4.1 times.